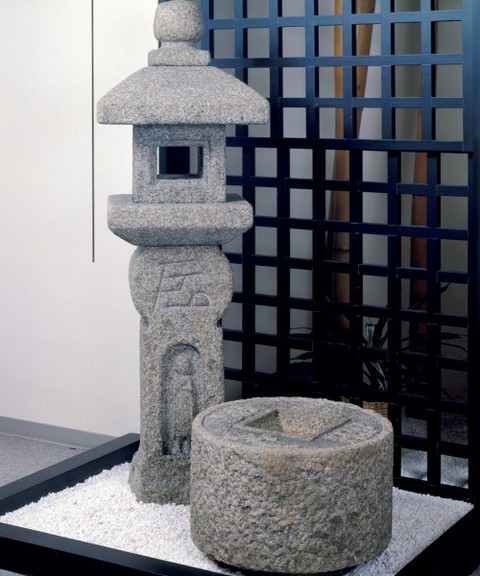 Although man's relationship with stone began long ago in the Stone Age, it was not until the end of the Nara period (710-794) when Buddhism was introduced into Japan that stone became more than just a utilitarian material. Gradually, as the art of stone work developed, pieces of stone craft of real cultural value appeared. Being blessed with fine raw materials such as the good quality granite available from the village of Shirakawa at the foot of Mount Hiei, Kyoto stone carving has been sustained by the very nature of the cultural of Kyoto, which has been at the center of Japanese culture for over a thousand years. Stone carving techniques, which cannot be found in any other part of the country, have been acquired here over the years and are still in use to this day.

Almost everything that is made is for use in the traditional Japanese garden. A mason is responsible for carrying out all of the work on a piece, making each and everyone according to its function and form. Inevitably though, it is the stone lantern that has been an indispensable component of any traditional garden since the Momoyama period (1568-1600) in step with the fashion for tea. Besides lanterns and various kinds of tubs and pots, some pieces of sculpture are also made. The traditions of this ancient craft are being maintained by 84 firms employing 374 staff, 11 of whom are government recognized Master Craftsmen.