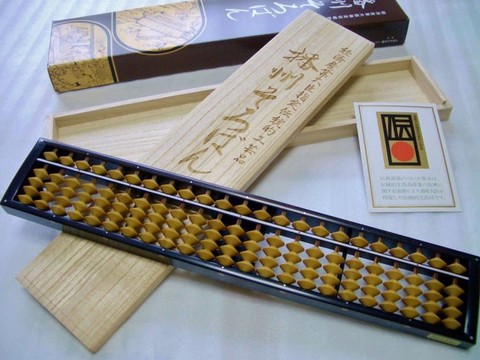 Coming first from China, the abacus was brought to Otsu from Nagasaki toward the end of the Muromachi period (1392-1573). It was during the following Momoyama period (1573-1600), when Toyotomi Hideyoshi sieged Miki castle, that the people of this small castle town fled to nearby Otsu, where some learned how to make the abacus. When they finally returned to their homeland, they began making what became the Banshu abacus. The peak of production here was in 1960, when 3.6 million abacuses were made. Demand has gradually fallen since then due to the appearance of the electronic calculator. The abacus, however, still has value as it provides a much more graphic way of visualizing calculations, and as such still has a place in the curriculum of many schools, where in the past principals of education were "reading, writing and abacus". Some also believe that using an abacus can stimulate the brain and prevent senile dementia.

Dense hardwoods such as ebony are used for the frame and boxwood and birch are used for the beads. The smooth operation of these abacuses is one of their special features but, the fineness and delicacy of the work, makes them works of art in wood. There are now 81 firms employing 197 staff, 12 of whom are government recognized Master Craftsmen.