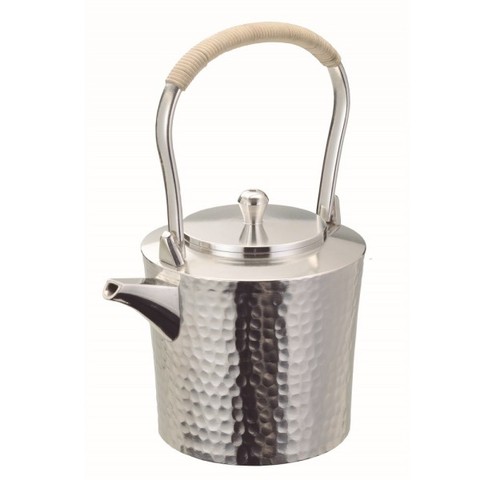 Pewter ware was first introduced to Japan some 1,300 years ago by envoys from China. Later during the early part of the Kamakura period (1185-1333), the Zen monk Eisai visited Sung dynasty China and returned with a maker of tea urns. His skills with pewter are said to mark the real beginning of this craft in Japan. It was not until the 18th century, however, that a production center was established in Osaka.

Pewter is a very stable metal. It is ideal for such things as a sake flask as it does not affect the delicate flavors of this rice wine, and the taste of water kept in a pewter container is improved by an ionic action. It is also good for flower vases and especially good for the storage of such things as tea, which would deteriorate in anything less than an air-tight container due to high temperature and humidity. With 8 nationally recognized Master Craftsmen among the 21 employed, there are still 7 firms making a wide range of articles such as religious ornaments, and sake cups, expressive of this distinctive metal.