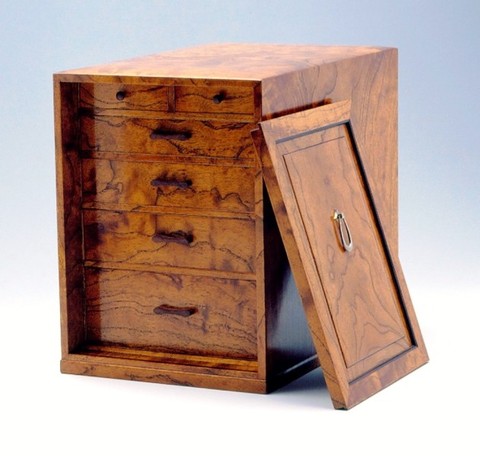 Many skilled individuals were encouraged to live and work in Edo (Tokyo) by the Shogunate right from the outset of the Edo period (1600-1868), and craft industries developed as a result of the formation of enclaves within the districts of Kanda and Nihonbashi for such specialists as carpenters, smiths, and dyers. The emergence of a consumer society that took place in Japan from about the middle of the Edo period in turn led to a specialization among carpenters, with some producing bentwood goods, others making fine screens and doors, and still others who constructed religious and palace architecture. Fine cabinet makers and joiners also emerged and are still active to this day.

While fine cabinetry and joinery in Kyoto developed as a result of supplying the needs of the Imperial court and the tea ceremony, the style which still characterizes Edo joinery developed by meeting the requirements of the warrior classes, merchants and Kabuki actors resident in Edo. In essence this distinctive Edo style is expressed through sturdy construction and a brevity of form, while avoiding unnecessary ornamentation and maximizing the effects of an attractive grain. Perhaps the best and most highly acclaimed of all the woods used is the so-called shimakuwa, a mulberry from the island of Mikurajima.

The range of goods produced today includes chests, desks, various kinds of stands and shelves. Boxes are also part of a repertoire which is completed by hibachi, items for the tea ceremony and pieces associated with the playing of Japanese music. There are now 23 firms with 39 staff, among whom 9 are government recognized Master Craftsmen perpetuating the reputation of this fine work.